Last summer, the kids and I fell in love with So You Think You Can Dance and on the first (can’t remember) night of competition, one of the judges (Nigel I think) shared an encouraging quote with the people he was about to eliminate.  He shared a quote from Winston Churchill:  “Success is not final, failure is not fatal: it is the courage to continue that counts.”

I loved that quote then.  I love that quote even more now.  For what feels like my entire life (no over-dramatic pity plea here), I feel like I have constantly wrestled with my own self-perceived sense of failure.

However, in the last couple of months, I have had to re-examine my self-perception and the qualities that I thought made me a failure and the measuring sticks against which I was placing myself (see the numbers blog entry).  And this created a whole new sense of reflection.

This blog, in so many ways, has been rather life altering for me.  I have had to scrutinize who I am as I pen these words.  I am always cognizant that other people are able to read what I have written and I don’t want to hurt anyone.  I might get angry and have a tendency to be overly-sarcastic, but, in the end, I would rather make people happy than not.

Which makes me think of how to write and what to write about…constantly.  On top of that, I constantly think about what I am willing to discuss about myself and how I want to present myself.  Does this make me sound insecure?  Probably.  That’s okay.  I am insecure (big shocker there….not!).

So, to start bringing this back full circle or, at least, into the next revolution of where I envision today’s entry to go, I was thinking about failure today.  Not for any reason; it was just on my mind.

We are terrified of failure.  In the last twenty years, I have watched how parenting went from negative reinforcement (spankings) to positive reinforcement (time-out and “you’re a winner for participating”).  Now, I will confess, I am an advocate for spanking.  Of course, I know that in confessing this I am probably lining myself up for angry comments about how I am a horrible parent who is abusing her children.  Before you skip down to the comment section and start blasting me, I refuse to allow you to put me in a corner (and my name is not Baby and I don’t dance dirtily) and start pointing your fingers at me and castigating me.  My children are not horribly maimed or miserable or feel as though they are the worse things on Earth.  I can’t even remember the last time I administered a spanking.

Regardless, I also am incredibly quick to show my children my love for them and my pride in them.  I have fantastic kids!  I really do.  But, sometimes, I have to let them fail.  Because I have watched my students who have never failed before because of all the different safety nets that have been created by parents, teachers, friends, even myself do nothing more than enable kids never to confront the fact that they might fail.

Failure is terrifying.  I have failed at so many things and I am always living in a sense of anxiety that I will fail again.  I worry that if I fail as a teacher that I will negatively affect my students.  I worry that I will fail as a parent because I will cause irreparable damage to my children.  All right, secret confession here.  I worry about what my children will say about me as they grow into adults.  I worry that they will complain about me and how I treated them and that they will only remember me with anger and frustration.  Yes, I’m being paranoid.  But I fret about this frequently (to myself…I’m too embarrassed to give this more than a digital voice).

However, I have also seen that I must start stepping back, at times, and let my kids experience failure.  The Boy has a science fair project that was assigned last November.  He has barely worked on it and has just learned that it is due on this coming Monday.  He wanted to test the effect of weight on different styles of bridge designs.  Cool idea.  I immediately bought him supplies so he could build the bridges.  Well..November elapse.  December disappeared.  January came and went.  Finally, February arrived.

In my defense, I have brought up his science fair project at least once a week and he continually assured me that he was, indeed, going to start working on his project.  Guess when he finally started building the bridges…last week.

And they were terrible.  They were barely stuck together with glue.  And he continually cut other corners in order to find a way out of work and out the door so he could go sledding and play with Nerf guns.

I offered constructive criticism.  It was ignored.  I told him that if I was his teacher then he would earn an F.  He sort of awoke at that point.  Finally, the Husband stepped in and took notice.  I could see that he wanted to fuss and fume at me for not being more on top of the Boy and I told him that I thought it was time for the Boy to experience failure.

The Boy in Germany..he make this face at me all the time, especially when I’m being weird.

That was a horribly difficult decision to make as his mother.  However, I work with seniors who have never really experienced failure before (remember, safety net comment earlier).  And I am very much guilty of being the one stitching together safety net after safety net for kids who just don’t care.  But these are kids who are in high school, earning high school credit, and applying for colleges that are looking at their grades and their high school credit classes.  Therefore, failure isn’t always the best thing for them when they’re seniors.

So, yeah.  I was going to let my son fail his science fair project.  Because I realized that I was constantly stitching together safety nets for him and he kept on taking advantage of those safety nets.  Over the years, I have paid for tutors for him and stayed up late to help him get his work done and even asked teachers for extra credit because the Boy didn’t do the work right the first time.

So, this time, I took away the safety net and watched him crash.  Thankfully, the science fair project isn’t due yet and he has a couple of (possible…I’m still waiting to see the flakes) snow days ahead of him.  And he’s sort of grounded (because he sort of messed up royally last week) until he finished his science fair project.  So I guess he still has a safety net.  But I’m not holding the handle to it.  Not this time.  Because I know that if he fails here, it will actually (sort of) be okay because it won’t affect his high school grades/credits.  But it will teach him.

I have written a novel that I love and has been rejected multiple times.  But I have not given up because of those perceived failures.  I have chosen to continue forward with writing.  I still dream about being published.  This blog is evidence of how I strive to achieve that dream.  Failure is terrifying and horrible and the worst thing in the world.

It is also beautiful, much like a dissipating rainbow, a huge thunder-head-storm cloud, or a broken mirror reflecting a thousand distorted reflections.  But in combing through those thousand, distorted reflections, I found bits and pieces of myself that I never knew existed.

And they made me stop seeing the distortions and instead a little bit of loveliness.

So, yeah.  I’m an awful parent.  But my kids are not going to be failures. 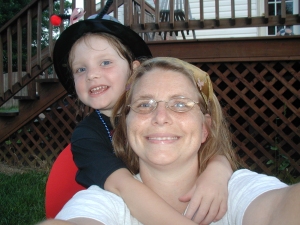