I love The Sound of Music, specifically the Julie Andrews’ version.  I grew up watching her twirl around the Austrian mountains and then go through the streets of Salzburg, which I have visited many times (by the way).  I love that movie and still can’t understand how Christopher Plummer could hate it.  He is such an evil captain…..

Regardless, yesterday after I finished my rantish-writing about the 60 second pep talk, I thought a lot about how I still believe in hope, how hope and optimism is a fundamental part of my spiritual make-up (I wonder how that would look cosmetically…sigh…I just squirreled). 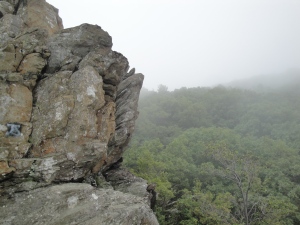 Humpback Rock (parts of it)

And this led me to remember a time when I was in college and was a member of Inter Varsity Christian Fellowship which was a life saving organization for me.  This was a place where I found acceptance and love and no judgment.  I could be me (and this was whacky me) and I was loved for being me.

Anyhow, in October (or so) of my freshmen year at college, it was declared that IVCF was going to do a hike up to Humpback Rock in Charlottesville, VA.  Cool.  I want in.  Problem, I had pulled a graceless moment about a week prior and slipped and fell and sprained/damaged my foot and was on crutches.  You know what’s really funny, I slipped in a puddle of beer at a fraternity party.  A bunch of hall-mates wanted to hit up the party scene and they graciously invited me.  So, I decked out in my punk regalia and joined them, hoping that I was going to be able to dance like I used to dance in the clubs in Germany.

Note, I never drank any beer that night.  I hate beer.  Hated it then.  Hate it now.  My mom, though, likes to fondly laugh about how she knew she never had to worry about me drinking beer.  But slipping in beer?  That’s another story.

So, yeah.  I asked the DJ to play a Cure song so I could dance to one of my favorite groups and he obliged and “Just Like Heaven” came blasting over the speakers and I found a vacant hole in the middle of these throbbing, jumping bodies, and started to dance my heart out until….slip!  I don’t know that my butt landed in the beer…I know that I hobbled back to my dorm, eventually went to the on-campus medical center, and was told, “We don’t know what’s wrong with you.”

Excellent.  Regardless, an IVCF friend of mine, Jeff, who didn’t judge me for slipping in a puddle of beer while dancing to a New Wave/punk song, lent me some crutches so I could get around more easily until my foot healed.  Woot!  I always wanted to be on crutches.  “See…dreams really do come true!”

So, Thursday night, the announcement is made that we are going to Humpback Rock, and I, not wanting to be left out, join in. Sure, I’m on crutches, but I’ve been hiking since I was seven.  Besides, because I am on crutches, I should be guaranteed to be a little more sure-footed…right?

Saturday night (I think), we caravan to Charlottesville and eventually up to the Blue Ridge Parkway and then up to the parking lot for the hike up to Humpback Rock.  About thirty or so people spill out of the cars and we arrange ourselves to start walking/hiking.  And, yes, I still had my crutches because I couldn’t put weight on my foot. 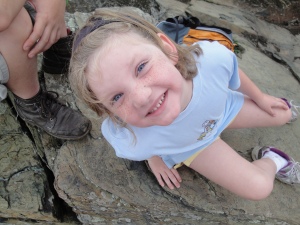 The Girl at Humpback Rock

I don’t remember how long the hike up the mountain lasted.  I know that we left right around twilight and by the time we arrived at the top, it was full dark. I remember that, steadily, the flashlights started failing and no body could see and I couldn’t walk so I was hobbling around in the dark on crutches.

Turns out, Humpback Rock, in the daytime, is an amazing place filled with steep precipices.  In my fuzzy memory, I thought it was smooth and glacial.  Come on.  I was “walking” around on it with one foot.  Twenty plus years later, I went back there with my children and our dog and I finally saw Humpback Rock in the light.

Ooooppppss….not a very safe place for crutches.  Especially in the dark.

That night, everyone started off in their own little corners of the world, climbing on the rocks, sharing quiet moments with friends.  But as the night overtook the day and the temperatures fell, we slowly migrated together into a tight huddle.  And, somehow, someone started praying. 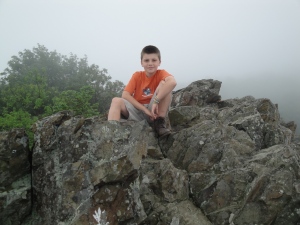 The Boy at Humpback Rock

As voice after voice echoed into the night, calling out for God’s wisdom or praising Him for “great things He hath done,” I was humbled by the intense serenity and spirituality of the moment.  I broke cardinal-laws and opened my eyes and watched the sky and saw stars plummeting to the Earth, one after another.  I remember the fuzziness of the Milky Way, the brilliant constellations of the stars in their orbits and the street lamps in the valleys below.

I was suddenly and profoundly aware of the incredible dichotomy of existence.  Here I was, on a mountain, curled up with people I had barely known for a month or so, and I was filled with the peaceful sensation of God’s love.  Meanwhile, in the valley below me, I knew that something horrible was probably happening to someone.  And I was so saddened…so humbled that I was safe…. 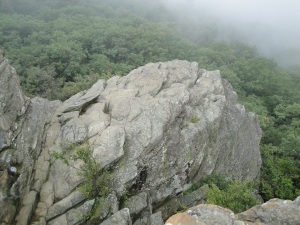 Humpback Rock as the mist rises

At one point, a young man, Matt, stood up literally on the corner of the cliff, and cried out to God.  I don’t remember his words.  I remember his passion.  Again, I broke the cardinal rule of “thou shalt close thy eyes during prayer” and saw Matt’s silhouette framed by the God-made and human-made lights.  I remember the anguish in Matt’s voice.  He was searching for something; maybe he was trying to prove himself to God.

I remember that as Matt’s pleas fell silent, another young man, Ward, our guide, spoke in absolute command and patience and strength, “Sit down, Matthew.”  I remember the stone in Ward’s voice, his fear that his friend would try to trip the light fantastic and see if he could find his wings.  I remember seeing an arm reach out and grab a hold of Matt’s shirt and hold on, an anchor, a tether, a friend showing love.

Matt was safe.  He never did anything stupider than me and try to hike around a mountain peak on a pair of crutches with no light.  He merely sacrificed himself to God.  No, he’s not dead.  No, he didn’t do anything that hurt himself. 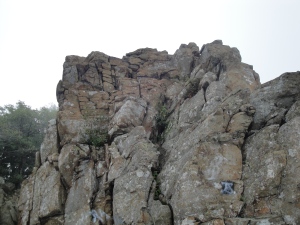 But I will always hear the absolute passion in his voice as he cried out to God.  In that moment, I could hear the voices of the patriarchs echo off the mountain and I knew that I was witness to something profound.

We eventually came down the mountain and went to Ward’s house where we ate pizza and sang songs and told jokes and fell asleep. And, next spring we returned and, ironically enough, I did the climb again on crutches because my stupid foot was hurting again.

I have returned to Humpback Rock several times since those nights of prayer.  I have never seen the sky rain down meteors like I did that evening.  I have never really heard such passionate prayer as I did that night.

But when I bring my children and my dog to Humpback Rock, I am always awed at God, His grace, His love, and the absolute passion of selfless believers. 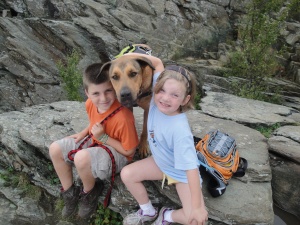 The Boy, the Girl, and the Dog at Humpback Rock