Today is my 43rd birthday.  Yup.  I’m the big 4-3.  Wow….feels underwhelming as I type this.  Maybe because my age is a bit under-whelming.

Age is not that big of a deal to me.  I have some wrinkles in my forehead.  I might have gray hairs….I really can’t tell because my hair is still naturally blond, at least once the warm spring days hit and I’m outside in my gardens constantly.  I don’t know why people conceal their years as though their ages are a mark of shame.  I’m 43.  I’ve lived this long and still feel like I’m going to live at least another huge chunk of years.  I’ve got a little bit of wisdom under my belt, some great jokes, some even better experiences, and enough words to fill up a bunch of books.  Of course, the words are not necessarily in logical order and they aren’t always going to make sense or amount to much of anything.

For example, I’ve been blogging for about 70 days and I write close to a 1000 words a day.  By publisher standards, I’ve written a novel in my silly blog.  Woot woot!  Now, I actually do have a novel, The Pear Tree House that I love and still need to finish editing, but that’s a summer workshop for me.  At this point, I’m just concentrating on my daily 1000 words that I need to spill out of my soul and onto the page…or the screen….as you will.

Birthdays are something which, unfortunately, cause huge amounts of drama in my family. I am shy.  My husband is a friggin’ reclusive hermit.  I am introverted.  He is withdrawn.  This means that when it’s time for him to go shopping for me, he starts having panic attacks that translate into grumpiness which makes Oscar the Grouch, Grumpy from the Seven Dwarves, and all of the world’s worst comic-villains look pleasant.  And I’m not even exaggerating.  Talk to my in-laws.  They’ll tell you stories about cereal box blockades, egg missiles, and a broomstick going through the door.

But he’s my beloved rotten snake corpse and I won’t trade him.

March starts with the Boy’s birthday and concludes with mine.  In a family that is trying to be frugal and is rather anti-social, this creates another level of drama.  The Boy wants sleep overs and parties at Ci-Ci’s or Shoney’s.  I want to make sure that I can pay for the grocery bill and electricity bill after the teenage boys have eaten my house and devoured the pets.

And then there’s the nature of the gifts.  The Boy just turned 14.  He’s in that wonky stage in which he is too young for teenager things (like clothing or pretty-girl posters or stuff like that…I don’t know what teenage boys want for their birthdays).  He’s too old for toys.  He wants Nerf guns but he leaves them out by the mailbox and they get destroyed between rain and the neighborhood kids running on top of them.

Gifts are hard for Pat and me.  It’s hard for us to gauge what the other wants.  It’s even more difficult to make sure that it’s still there after the person has finally found what he/she wants.

I buy for nostalgia.

I buy for wants.

Can you see a toxic mixture?

Add on top of that mess the fact that I am a sensitive woman who invests a lot of time and energy into making people happy and protecting people’s feelings.  And Pat is a rotten snake corpse.

Yeah….Chernobyl was nothing in comparison to some of the knock-down-drag-out fights we’ve experienced…over birthdays.

I never said I was a good person or someone easy to get along with.  I still don’t know why people think I’m nice.

So, the Boy’s birthday passes and he seems to be fairly happy with the iPod we helped him buy.  Success so far.

And then mine started nearing and Pat started getting anxious because (a) he really had no idea what I wanted even though I told him exactly what I wanted and the stores where he could find them and how to get discounts on everything.  And, then, (b) he would have to leave his nautilus shell and go into the public world and interact with people.

If you know my husband, then you know that this is worse than any punishment ever concocted by man.  I think several of the Geneva Convention rules might be broken by sending Pat out and into the public, especially a mall….”The horror!  The horror!”

So when I realized that I really had no way of getting the book I wanted because life kept on getting in the way and he was only driving himself miserable, I happened to go to Barnes and Noble and used my own allowance to buy myself the book.  Done and done.  By the way, I also read it and it was wonderful.  I’ll post about the books I have read in the last couple months tomorrow or in early April.  Promise.

When I attended a conference in early March, I had to drive through some of the more eclectic parts of the city and I realized truly how charming it was.  Between the art galleries, the murals, the local restaurants, the used book store, and incredible toy store, a movie theater that still has the decorations dating back to the 20’s, and a personality completely unlike anything in the cookie-cutter ennui of suburbia, I found my birthday present.  A walk with eating and no diet-guilt and no money-guilt.

My birthday is today.  However, I had school, a workout, grading, editing, and my writers’ group meeting.  Pat had work and Boy Scouts.  Oh, don’t forget dinner and being a family!  Today was going to be packed. 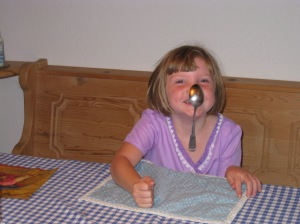 Therefore, I asked for yesterday to be mine.  I woke up early (not intentionally) and went to the gym where I worked out hard for an hour and a half.  After a lovely shower (on the gym’s water bill…not mine), I headed home to a family wide awake and ready to go.  We drove downtown; I almost went the wrong way down one-way streets at least once or twice, and we eventually found a parking spot that I screwed up trying to get into because it was parallel parking.  Pat did a better job…but not much better.

We came out onto the main street and started at a doughnut shop and everyone got their own specialty doughnut.  Then, there was the taco restaurant.  Then the gyros stand.  Then the cupcake shop.  And the French bakery.  Don’t forget the bookstore, the music store, the Fair-Trade store, the antique store, the chocolate store, the toy store….and the lady with the sores on her mouth from smoking a crack pipe.

Okay….skip the lady with the sores on her mouth from smoking a crack pipe.  She was a sad shadow asking for spare change.

What did I get yesterday?  A full belly.  Laughter with my children.  A day of peace and no anxiety and no stress.  A day of memories that are etched into the smile lines framing my mouth.  A day in which my dimples were pronounced because I couldn’t stop smiling.  A day in which I held my husband’s hand as we drove to and from this part of the city.  A day in which my husband held me against his side, much like when we were dating, and we just loved one another.

Today has been magical.  Between colleagues, students, and just random people wishing me happy birthday to beautiful and caring messages written on my Facebook wall to wonderful gifts from beloved friends and colleagues, I have been looking down on Cloud Nine because it’s way too low for this happy girl.

Simplicity was the perfect gift.  It gave me everything but doesn’t collect dust or eventually break.  Simplicity is not a precious stone that might fall out of its setting much like my original engagement ring.

Yesterday’s gift was simplicity.  It was love in its purest form.  It was thoughtfulness and familial love.  It was perfect. 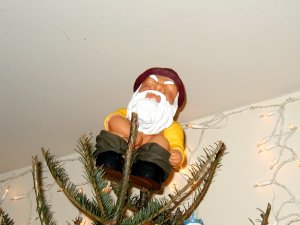 For a brief amount of time, this was the Christmas “angel,” a gnome.

And, just think, Christmas is only nine months away…