Today, in my second block, the students and I had decided to have an “intimate get-together” ala Phineas and Ferb.  This class has been absolutely stellar, a group of students who perfectly fit one another and truly are amazing.  Immediately after the bell rang, I was asked to step outside which I did.  They had something up their sleeves.  I’ve known for a while but decided not to speculate.  I don’t get surprised that often, so the chance to be surprised is always a welcome gift.

For about ten minutes, two students took turns keeping me company in the hall.  They were supposed to keep me “distracted.”  Love you guys, but it’s obvious that you were planning something.  I wasn’t distracted.  But I trusted you enough to know that you were going to do something that wasn’t going to land me in the principal’s office or result in a “thank you for your service but you need to go” letter.

I was right to trust my students.  Not my gut.  My students.  Because when I was finally invited back into the classroom, they had gathered around one another and a beautiful framed picture that had pictures of seventeen of the most lovely people in my life.

Now, if you are one of my former students or a current student and you are not in this class, you are not allowed to start sobbing into your sleeve and wonder why you aren’t among these life-changing people.  Because, you are still likely within this category; trust me.

This has been an amazing year.  It’s been exhausting.  Look at my posts from the last month and you will see the debilitating radiation-poisoning of insomnia.  But my students were the rope that pulled me through each exhausting day and gave me the motivation to continue to push forward and past the debilitating effects of the insomnia.

And I’m glad that I did.  Because today I was presented with a gift that is reminiscent of Robert Fulghum’s “Gummy Lump” story from one of his books…probably Everything I Needed to Know I Learned in Kindergarten.  He talked about how his daughter (pretty certain it was his daughter) presented him with a shoebox/brown paper bag that was filled with her favorite treasures.  He took it to work, dismissed the contents…in fact, he threw them out.  That night, when he returned, his daughter asked for the box/bag and when he didn’t immediately produce it, she fretted that he had lost her beloved possessions.  He lied, sent her to bed, and ran back to work in order to dig through his trash can to retrieve the suddenly priceless valuables.  He even described commiserating with the janitor over his foolishness.

Over the years, Fulghum was presented with his daughter’s bag/box of love which had new items and was taking on a rather precarious appearance.  But he always knew to keep it in a sacred place and return it that afternoon.  Eventually, one day, she gave him the bag/box which was now called the “Gummy Lump” (his nickname) but that afternoon, she hadn’t asked for it back.

He said that he kept it.  In fact, at the time of publication, he still had it.  He even said that he wanted to be buried with it.

Because he recognized the intrinsic value of the “Gummy Lump,” a bag/box that is filled with items that, on the surface, appear to be completely worthless and are nothing more than a distraction. 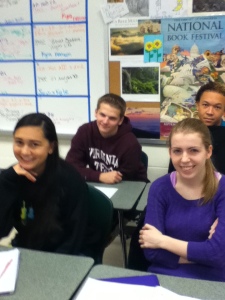 But past the gummy patina and the nasty residue are some pretty fabulous treasures.  Each item holds a story, a symbol of love and compassion that exists in a very real, primal, instinctive way.  This is love without requirements.  This is love that is based purely on emotion and not a selfish “what’s-in-it-for-me” point.

These are the little stones that I used to carry in my pockets.  First from the children I babysat to my niece and nephew to my own children, I learned to value what I called the “love stones” because they were tokens of love from children who saw something they deemed shiny and beautiful and wonderful and wanted to give them to me for no other reason than they loved me. 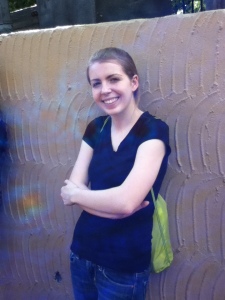 These are the notes and the cards that inhabit several desk drawers at school and home.  I had one note that I carried in my wallet for years until it finally disintegrated due to me pulling it out of my wallet all the time to remember that teaching is an act of love that can transform a perfect stranger’s heart.

Today, I received a framed….poster (not the right word..can’t think of the right word right now) that had pictures of every single student in the class.  In the center was a picture of the seniors and me at the Senior Banquet.  Within the students’ pictures was the picture of me on the day I won Teacher of the Year and a selfie I took with them on Halloween.  I have used that picture twice to express how much I love my job.

Surrounding the picture were messages from each and every student, words that I will carry with me forever into the future as a love-stone, a “Gummy Lump.”

This has been an exhausting year.  A year of constant paperwork and accountability that has left me frayed.  But this has also been a year of incredible rewards and challenges.  A year in which I have done work that has transformed my career and made me into a better person.  Not just a teacher.  Not just a wife or

daughter or mother.  A better person.

And this transformation wasn’t because of some epiphany that I had in the middle of meditating or reading the Bible or praying.  And, no, I’m not bashing religion.  Because I told my students today that I was going to break the boundary of the Separation of Church and State because I can only think that God must really love me because he gave me seventeen incredible people in one room who constantly and continually blessed my life.

Ironically, today I also received notification that I was not going to be considered any further for an award a student nominated me for.  Yeah, I felt a tiny bit of a pinch in terms of my ego. And then I remembered my “Gummy Lump” sitting in my classroom, waiting to be taken to my future classroom where I will hang it by the door.  It will stand as a testament to love, a reminder of the joys of being a part of people’s lives who are willing to walk beside me on the paths of life, even if only for nine wonderful months.

But I don’t need it when I have been richly rewarded as it is.  I know what an award looks like.  I won one earlier this year.

But I have lived it through the blessings of my students all year long.

By the way, Brett, please make sure the peers in your class know that this has been written.  I need them to take this gummy lump with them for all their days.  Remember, no matter how much the world tells you that you are worthless, you have already changed one life for the better.  And this life does her best to touch the lives of others.  You have started a legacy of compassion and love.  Keep marching forward.  The world is waiting for you to change it.