I couldn’t really post yesterday…after eight hours of work, my hands were swollen.  Yup, yesterday was “put in the garden” day.  I would rather have done the work several weeks earlier, but life was getting in the way and yesterday the sun and fresh air and wind beckoned me outdoors. Screw running.  I needed to get my hands dirty.  Literally.

My beloved husband bought me a tiller years ago.  He knows my passion for getting dirty (wow…talk about unintended innuendos…oh well..I’m leaving it).  So I pulled that baby out, filled it with gas, pulled the cord a million times, and got that baby spinning.  And it dug deep into the soil for about ten seconds before it died.  Repeat actions.  Died.  Repeat actions.  Died.  Turns out the primer bulb had gotten perforated which means the hermetically sealed pressure was no longer in existence so no fuel was getting to the engine.

So what do you do when you have no idea how to fix the machine?  Pull out the shovel.

I have two huge (in my opinion) vegetable gardens.  And yesterday I dug up both by hand-left-foot-and-shovel.  And it was amazing.  I could see the difference in my body thanks to all the exercise that I have been doing in the last four months.  I briefly felt pain, sent the Girl to get me ibuprofen, and adjusted how I was shoveling.

Now, you might not find that to be much of a big deal.  But my kids hate gardening.  Most likely because I can be a bit of a….mean person when I am gardening.  I’ll assign a chore that I think is fairly simple to complete, fairly obvious to complete.  And the kids won’t do squat.  Which pisses me off.  So I’ll emotionally flail and they get all unhappy and then this wonderful experience is now something horrific.

I’m sorry kids.  Didn’t mean to ruin what was supposed to be a nice experience. 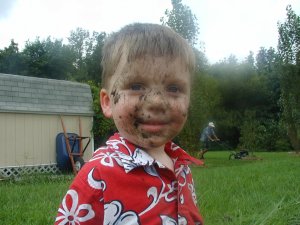 The Boy after weeding turned into a mud-fight. I kind of won.

So, yesterday, I chose to use some basic marketing strategies that I had actually learned from the book Cheaper by the Dozen and let the Girl negotiate her work for what she wanted.  She originally said that she wanted five dollars for the day’s work.  This was ridiculously low and I told her that.  She negotiated for ten dollars per garden or a total of twenty.  I agreed.  Then, she brought up that she wanted an Ever After High doll.  Oh, really?  Well, the Girl’s birthday is this week and I just happen to have exactly what she wanted in my closet in my office.

“Give me a second,” I told her.  I went inside, got the doll, came outside.

The Girl literally dropped the garden tool she was holding and started shrieking in joy.

We set her doll under a tree to keep her from getting sun-bleached.  This gave the Girl motivation to work.  Oh, and I forgot, the locking part of the deal was no complaining.  No whining.

Eight hours later, we had a perfect day.

The Girl “combed” garden-number-two (using a garden rake to rip out long weeds) while I dug up garden-number-one.  She and I chatted about playing with dolls, music, her anxieties about school, and life in general.  As she ripped out huge chunks of weeds, she gathered them up and put them under the pine trees that are used as a fence between one neighbors home and ours. 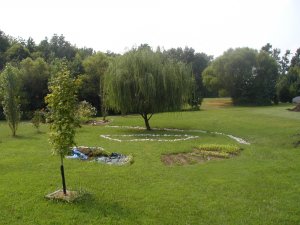 My backyard twelve years ago. Those are my gardens…only they’re raised beds now.

After doing all the digging, she and I worked together to break up the soil in garden-number-one and then raked out the weeds and their root-systems.  This took us up to lunch and waking up the Boy who was still sleeping at noon.  I originally thought he was getting ready for a growth spurt.  Turns out, he had a stomach bug.  Eeeewww…

Garden-number-two had its soil broken up, weed systems removed, and generally prepped.

Here’s where the real issue came into effect….

1.  The Boy had not gotten sick at this point, but he was steadily growing more and more miserable.

2.  The stores were packed with people.

3.  Because the stores were packed with people, the plant were already picked over and a lot of what I wanted to plant were gone.

But I bought the soil and the compost/fertilizer that I wanted plus some of the plants that I wanted.  I dropped the Boy off at the house (begin sickness for him) and took the Girl to other stores where we bought some more plants plus a popsicle for her and a special soda for me.

The Girl got to play in the hose.  I got to watch my world transform from chaos to order and beauty.  The Girl finally got to go under a tree and retrieve a doll she wanted.  I got to watch my daughter, my beautiful daughter, metaphorically sing and dance with joy.  The world was perfect, even if only for a few minutes.

The Girl in my front-garden.

Now, in looking at that last sentence, it looks like I’m foreshadowing something horrible.

I’m not.  Nothing bad happened.  The Girl played with her doll.  The Boy woke up and said that he felt better.  I held ice packs in my hands to bring down the swelling.

My neighbors probably get a bit frustrated with me.  I’m not good about getting into my gardens on a weekly basis to tame the weeds.  Once school starts or the heat really picks up, I’m either worn out or so miserable in the heat that the idea of working in the garden makes me want to find some horrible disease and say, “Oops, I can’t because….”

But when I finally do get outside and thrust my hands deep into the soil and feel the richness of life, feel the complexities of the world playing against the tips of my fingers or along the ridges of my palms, I no longer am apart from the world.  I am part of the surging life that exists all around me.  I can only imagine how joyful Whitman, Thoreau, and Emerson are right now at these words.

But that is who I am.  I feel this every time I go to my mountain and leave behind the traces of technology and live within sunbeams and dappled shadows made from sunlight perforated by leaves.

By throwing aside the technological world and literally digging deeper into the soil, I lose the burdens that can weigh me down and am only a being who goes deeper and deeper into the world.  And this contentment is punctuated when my daughter suddenly cries out (joyfully), “A worm!  Hello wormy!”

She doesn’t say ewww….yuck.  She holds the animal briefly before putting it back into the dirt.  Unless the dirt clods are still firmly held together and then she’ll cross the boundary to my side of the garden where the soil was looser and she gives the worm a new home, a new chance at life.

I love astronomy.  I’m not going to talk about the physics and math behind it.  I just love looking at the stars and the planets and learning the names for the different systems that exist in the universe that surrounds us.  And when I look at my gardens, I see the complexity of the solar system.  In some respects, my gardens are tiny, microcosmic nebulae.  They are bearing life.  They are creating life.  And I just happen to be the faithful keeper of these Earth-bound stars, dusting them when they become cloudy with debris, pulling off the june-bugs and bugs when they become a nuisance, and dancing with the bees when they bring forth life.

Now if I can just convince Loki to stop burying one of his toys in the garden.  He is not as good a gardener as he thinks.  The toy doesn’t sprout or produce new toys…but it does have a tendency to get covered in root systems and is very dirty.