When I was a child and up through my teenage years, my family had a game we played, especially when we were in Hintersee, a lake in southern Bavaria.

The game was hide-and-go-seek on steroids.  Essentially, It has to find the people who are hidden.  When It finds a person, that person goes to base.  While the person is at base, the person would narrate what It was doing and where It was going.  And while It was searching for the remaining people, the people who were still hiding would come out of their hiding places long enough to beckon or wave to the captured person at base.  This was enough that the person could leave base and go hide again.

The game kept on recycling itself.  And my brother was a spectacular hider.  A massive boulder (as in at least fifteen feet high and wider in size) called “Big Rock” was originally one of his favorite hiding places.  Peter would scurry up Big Rock and hide in the little crevice close to its top.  And then, whoever was It would naturally come around Big Rock to find Peter who was supposed to be hiding up in the tiny crevice at the top.  But Peter was slick and fearless.  Clinging to the tiny handholds along the rock’s edge, he would circumnavigate the rock so that while It was on the back-side/lake-side of the rock and looking up the crevice for Peter, he was on the smooth-surface, the forest-side of the rock where It was not located and, therefore, unable to see Peter.

When my parents and I figured out how Peter was escaping notice, he had to invent a new way to avoid discovery.  Including climbing out on spindly pine trees hanging over the water.

Note, this was Germany-ice-cold-glacial-runoff-water.  Not nice, warm Florida lake water.

This was the kind of water that froze off your skin in the middle of summer. 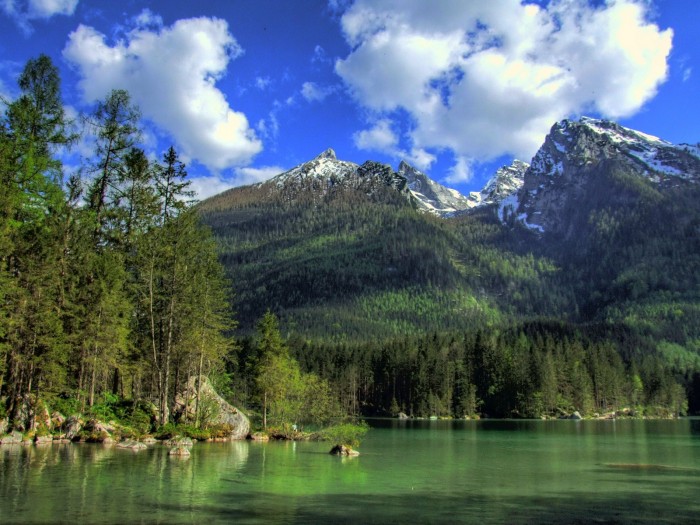 The big rock at the bottom left of the picture is the real Big Rock.  And to the left of the rock, where you will see a small cluster of pine trees…that was one of my favorite hiding places.

I wasn’t brave like Peter.  I could scurry up Big Rock where I would have the perfect view of base and the unlucky people found by It, but I wasn’t brave enough to climb around Big Rock and avoid discovery.  Eventually, I had to abandon Big Rock because I was always being found and I dreaded being It because I was not good at being It.  I was too selfish and too self-centered to enjoy being It.   That and I was so bad at finding people that a game of Beckon with me as It could last a decade, at least.

I am not exaggerating.

Mom could tuck herself into tiny little holes in the ground where water-saturated Earth had crumbled away from the huge rocks and formed deep holes.  That had big spider webs in them.

And I was dumb.

For a while, I had the perfect hiding place.  Just under Big Rock was another large boulder that had a tiny opening between the two.  Holding my breath and folding my body through the opening, I had a pretty good place to hide.  A little pine-needle covered bit of ground that bordered the lake and was under the cover of Big Rock that only Peter climbed.

Until my dad started climbing it.

No Big Rock.  No Big-Rock-Shadow place.

Back to the proverbial drawing board.

And then, one day, in a fit of desperation, I came to the lake’s edge where yet another field of large boulders bordered the water.  One boulder, in particular looked inviting.  A smooth, arched surface with handholds at the top.  An area that no one had yet explored, or at least as far as I knew.

With a quick burst of speed, I could pretty much run-crawl up the rock, hook my fingers into the handholds at the top, and pull and struggle my way so that I was straddling the rock.  And then, another rock with a flat surface, a perfect seat, jutted out over the water and far enough away so that no one could see me.

Unless they knew where to look.

If I scuttled down the flatter rock, there really was a wide dip at the rock’s edge, right, a good five feet above the water.

It was a perfect place.  Because the round rock that was the mounting point, the first rock closest to the forest, was so round, it looked like it offered no real concealment.  But that was the perfect deception.  Because once someone got to the top, they could see the seat rock, the second in line, the one closest to the lake.

Now, one thing that needs to be explained is that Hintersee, like many of the German lakes I used to visit when I was a girl, was crystal clear.  I really am not exaggerating.  And because I was so close to the shoreline, I could see straight to the bottom, could see the rounded stones smoothed by the passage of time and water.  And about ten feet forward and to the left of my seat-rock was a tiny “island.”  Really, it was nothing more than another rock, in the water, covered in a patch of grass.

But this rock-island was smooth, and the grass suggested a place of respite, of quiet relaxation.  And so, as I would sit on my seat and stare out at the mountains and watch the clouds roll across the face of the alps or quietly watch as a mother duck would swim with her ducklings past my seat-rock, I would pretend.

I pretended a mermaid would come out of the water and would sit on the rock-island and, there, she would comb her hair, stretch out her tail and stare in wonder at the iridescent scales, would sing, and (maybe) talk to me.

Because I was so well concealed from the beckon game, I would lose track of what my family was doing.  I was protected.  I was on my rock and was watching a mermaid go about her business.  I was in the middle of a dream world in which the ultimate reject was the ruler of her world, was not the worst beckon player on Earth, or at least in this little part of Germany.

My parents eventually discovered my hiding place, and my mother lovingly listened to me when I told her about Mermaid-Rock.  I meant the little rock-island.  She thought I was describing my seat.

But as I sit in my recliner in my living room in the middle of suburbia America, my daughter next to me, I am in the middle of a stone seat that, despite the cold and the fact that I was exposed to the elements, I could always watch a mermaid preen.

One day, when I was on Mermaid-Rock (the seat, not the island), a little rain storm passed over and I watched in humble pleasure as the raindrops hit the water, sending out cascading rings.  The rings would intersect, bounce off of one another, melt into one another.

And I couldn’t help but think about life, feel the absolute temporary moments that were quickly elapsing.

And then my mind fell and I dreamt about a mermaid pulling herself out of the water so she could have a quiet place to comb her hair.

And then, behind me, I heard my father’s voice, saying my name.  He was grinning because he had finally found me.  And I remember the profound disappointment that my dream world had been penetrated.

But I still remember the softness of my father’s voice as he said my name.  He knew that he had found my sanctuary.  And now, thirty years later, I am happy that he was there, as the rain fell, as the mermaid leapt back into the water.  And, together, he and I walked back to base.

By the way, the featured image for this post is the real Mermaid Rock.  I didn’t take the picture.  But I would know that rock anywhere.