In southwestern Virginia, far from the flooding that is currently ravaging West Virginia and the plot of land my husband and I own (we are worried about the people who live on the other side of the road from our mountain…it is very likely their homes have been irrevocably destroyed), is a mountain that lies on the ridge of the Appalachian Trail.

For a woman who grew up reading fantasy novels, who dreamed of writing fantasy novels–especially ones about dragons–Dragon’s Tooth Peak holds a certain allure for me.  When girls my age were dreaming about princesses and unicorns (all right, I’ll confess, I liked unicorns too, especially after Peter S. Beagle’s The Last Unicorn), I spent many ours mentally riding on the back of my favorite dragon, Gregor.

I have a collection of pewter dragons.  I have stories written (that have likely disappeared due to decay and a sense of embarrassment that I was writing stories about dragons…).  I have my dreams.

My brother first took me to Dragon’s Tooth Peak twenty-something years ago.  Together, we did the 2.4 mile hike up.  At the peak, we scaled the tooth and I learned, to my dismay, that I have a bit of a fear of heights.  Years later, I returned to Dragon’s Tooth with my brother, his children, and my first dog, Cooper.  Somewhere, buried in a  box or a photo album is a picture of Cooper and me.

During that hike, I realized that Cooper, who was new to me, was quite loyal and loving.  Early in the hike, I dropped his leash, deliberately, to see if he would bolt away; he never left my side and our partnership was cemented.

When I received my UV bead chain and counted the beads, I decided that this was more than just going on the AT.  This was about chasing after adventures, about following through on dreams and designs that I had been putting in the backseat of my life for just over a decade.

So last week, while my daughter and I worked on scraping the paint off her windows, she and I agreed that Friday was “Mountain Day.”  We would leave behind the work and the clean up and go out and hike, explore, have an adventure.  This last Friday, though, was forecasted to have rain and thunderstorms, not good for hiking in the mountains.  So we postponed our trip to today, Sunday.

Perfect.  84 degrees and partly sunny and wonderful.  I loaded the kids into the car, hit the interstates and coasted through the mountains, driving through memories and a dual sense of vision.  Eventually, we left the interstate for a mountain road which took us to another mountain road.

Dragon’s Tooth Peak is nestled at the edge of Catawba Valley which I have loved since I first saw it twenty-something years ago.  I have grown up in the alps of Germany, hiked in the alpine ranges of Switzerland and Austria.  I have seen stunning sites.

But, for some reason, the rural, agricultural, simplistic beauty of Catawba Valley is one of my favorite places on Earth.  I can’t explain why.  The rolling hills have nothing on the rocky peaks in Europe.  It doesn’t matter.  I love Catawba Valley and coming back today confirmed that love.  I’m a simple kind of girl and find that I fit into the quiet world of Catawba Valley which is characterized by..bird song, the rush of wind flowing through trees, the lowing of cattle.

It took me several wrong turns to finally arrive at the parking lot for Dragon’s Tooth Peak, and when the kids and I finally exited the car, the sense of nostalgia and anticipation drove me forward.

The last time I had been on this hike, the Boy was perhaps one year’s old and was sitting in a backpack on my back.  I hadn’t been able to finish the hike because the rocks we had to scale were difficult with a toddler on my back (and I was hugely out of shape).

But today?  The Boy is 15.  The Girl is 12.  The only thing holding me back is the fact that I have put on weight and I haven’t worked out as much as I have wanted to.  But I refused to allow this to inhibit me.

It took a lot longer for us to arrive at the peak because I walked “at the speed of slow.”  But in doing so, I walked next to the ghosts of my past.

I recognized the section of the path where I had released Cooper’s leash.  I could still hear the echoes of my brother’s children.

As my own children and I scaled the rocks which had been so prohibitive fourteen years ago, the nostalgia waned and I was fully immersed in this experience.  My son and I guided my daughter over the rocks, encouraged her to forget the aches and pains in her feet and ankles and to embrace the adventure for every incredible moment.

When we finally arrived at the peak and stood in the shadows of the rocks for which the trail and mountain have their names, I knew I had accomplished something.

Twenty-something years ago, my brother and I tried to scale one the main, pointy rock which really does look like a dragon’s tooth.  And when we were halfway up the rock, I froze, paralyzed with fear.  Although I was straddling the rock and couldn’t fall to my death, the terror blinded me to reality.  I remember clinging to the rock, wanting to sob (I might have been crying) and just wanting to feel the solidity of the Earth beneath my feet.

I have never forgotten that moment of horror, have felt it surge through me every time I have gone bouldering.  And I still feel the vertigo when I am trying to take a high step up or down a boulder/rock.  I feel embarrassed; I know that I’m safe.  But I still feel my balance shift, the world tilt under my firmly planted heels, and suddenly, I feel like I’m close to falling.

Today, I climbed a set of rocks with my son.  And, at one point, the paralysis overcame me and I started to panic.  And then I stopped.  I knew I was safe and didn’t have to feel these stupid emotions.  And I forced myself to become calm and shimmy my way down.

I was not going to be defeated.

My children and I ate lunch.  Each one of them played around the boulders, tried to climb far beyond my comfort zone.

We found a rattlesnake several people had told us about….it had just killed a black snake which we found fascinating.

I stood at the base of the rock which had once terrified me.  I would have climbed up a bit, but four college students were already sitting on the rock and I didn’t want to hinder them because of my slow speed.

Instead, I stood at the top of a beautiful world and watched the UV beads on my chain change color again and again as the clouds obscured the sun, as the shadows shifted when the trees bent into the wind’s embrace.

What has held me back?  A bucket list of stupidity:

What did I do today?  I created a mental list of adventures for this summer.  I have completed two.  I have thirteen more to go.  Thirteen more experiences that will yield a lifetime of stories to tell. 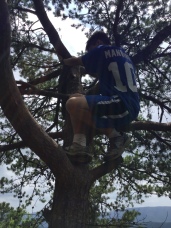 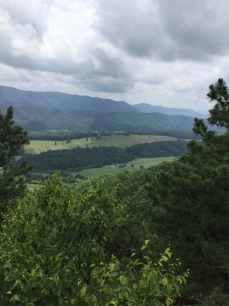 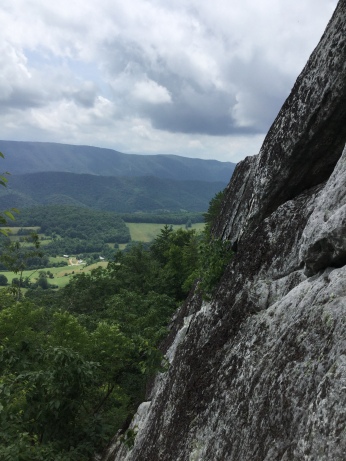 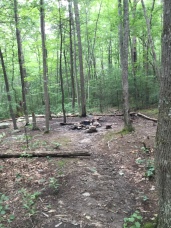 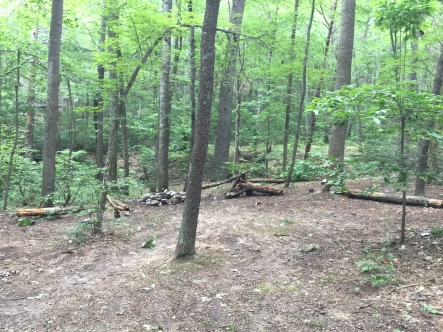 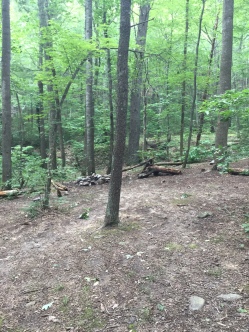