I have a fear of heights.  I know it’s there and it’s really not bad and usually doesn’t come out.  And then today happened.

The Girl and I went to Humpback Rocks in Crozet, Virginia, a hike I did twenty-six years ago on crutches….yeah..crutches.  At the time, I was in Inter Varsity Christian Fellowship and had just hurt my foot…couldn’t walk but I really wanted to go on this “hike.”

So I crutched my way to the top with my friends and we stood at the top and started clustering together as the night fell and the temperatures plummeted.  And as we clustered together, we started praying and it was a spiritual evening of watching stars plummet out of the sky while lifting everything about ourselves to God in a true and authentic way.

I wasn’t afraid of heights at the time.  I guess it helped that my mom is terrified of heights and I was more interested in mocking her than being afraid of anything other than spiders.  I was so proud of myself.

I developed my fear of heights on my first hike at Dragon’s Tooth Peak (see last week’s blog about adventure number 2).  My brother and I tried to scale/shimmy our way up the dragon’s tooth and I froze…couldn’t move other than violently tremble because I couldn’t move.

I do my best to swallow my fears, keep them from inhibiting my children from living their lives.  The Girl chose to do the hike up to Humpback Rocks.  I got everything set up and scheduled…got us out to the trailhead.

Beautiful day.  Great hike.  The first hill, though, is killer.  I swear, the incline is a ninety degree hill that just keeps going and going.  Yeah, I’m exaggerating.  I’m good at it.

Regardless, we made our way to the top, got to the rocks.

I was fine.  Just fine.  The Girl is fairly stable on rocks, was enjoying slowing climbing around the rocks.  And then, she wanted to go out a bit further.

That’s when the fear started.  I swallowed it as hard as I could, shoved it deep into my toes and did my best to turn a blind eye to the fact that edges surrounded my daughter and that, despite my best effort, I couldn’t do anything to keep her from falling if she should fall.

Yeah, that’s a big if.  But, in my world, those if’s are very real and very normal.  I’m used to the statement, “That’s not supposed to happen” or variations thereof.

I really worked at letting my daughter have her independence.  As she went out further to the edges, I followed her and checked out the lines of vertical and horizontal, creating a graph of anxiety and reassurance.  For every coordinate of calm I plotted, another set of coordinates of fear were plotted and drawn in painful, red lines.

Finally, she hit the point I couldn’t let her go further.  In spite of the fact that I asked her to shimmy (I couldn’t handle her walking but she was only two, three feet from being at the falling-precipice…the one that really could cause mortality, not a set of broken bones), the Girl needed to find her sense of self.  On a cliff face.

She obliged, asked me to stop, to look away.  But the love I have for her tethers me to her side.  I can’t let her navigate her way to the edge of dangerous fall and just turn around and hope that she’ll be okay.  I had to be there to, at least, do my best to let her ramble but have my hands out and ready to catch her….keep her from going over the edge.

And that edge….really did exist.  My mother could imagine those edges.  My mother hated the edges even when they were lined with heavy, thick wires that served as wonderful boundaries between the cliffs and me.  But, at Humpback? Nothing.

Just long lines of people’s names chipped into the rocks but nothing that I could use to tie around my daughter’s waist and keep her from tipping over.  And when she tried to shimmy closer to the edge, I asked her to stop, to come back to me.

All she had to do was put her hands behind her by six inches, lift her butt, and crab walk backwards to me.  Instead, she turned around, tried to stand….I tried to grab her hand..she yanked backwards, away from me….

And my emotional tunnel vision snapped.  In my head, she fell…over the edge…away from me.  In slow motion and painful detail.  And I closed my eyes and forced myself not to scream but I started crying and couldn’t stop.

I know it’s not real.  I knew it wasn’t real then but it felt so real.  I could see her fall. I could feel the rise of horror and….

The Girl said that my fear ruined the moment for her.  I appreciated the fact that she had the courage to be honest.  I wish I could have held back on the pain.  But I explained to her that I had just couldn’t do it anymore, just couldn’t hold on to the fraying laces of my terror and tie them around my neck and pretend they weren’t suffocating me.  I tried to give her the logic, tried to help her see the reasons why I was afraid for her and not as much for me.

She politely listened…tried to understand.  Nodded.

We played a bit more.  I actually scaled a different set of rocks and sat and stared at the valley.  I controlled my fear and encouraged the Girl to join me.  She didn’t…couldn’t scale the rocks because they were slick…or she lied to give herself the ability to have her independence.

I was afraid the day was ruined.  I was worried that the adventure was as a failure.  But when we came off the rock face and returned to the path, we found the signs that told us an alternate path to the hill of hell.  2.4 miles versus .8.  But on the Appalachian Trail.  The Girl tried to refuse.  The Girl tried to counter any argument I could make and I…well..I just said “no” and that the adventure was going to continue because we had time in our schedule.

So we hiked an additional 2.4 miles.  And it was amazing.  The fears disappeared and a doe quietly walked across our path and looked at us and then continued to walk slowly and without fear into the woods.  The Girl fretted that we were going to attacked by a rutting buck.  I tried to reassure her but she wasn’t able to let go of her fears…something I truly understood.  The doe left; the Girl and I went on a different path…followed the path that had diverged….

We walked down gentle, rolling serpentines, laughed, chatted, hopped over rocks.  I fell once…my ankle rolled.  But there was no fear.

There was no arguing.

We walked through the woods and listened for sounds of traffic, listened to the birdsong, whistled the Mockingjay whistle.  We talked about life, about fears, about our futures.

We talked about adventures and we didn’t harp on failures or fears.

We focused on one another.

The adventure took us to Charlottesville where I met up with my nephew and had a lovely lunch.  He helped me with setting up this website.  We talked about life, about cars.  He gave me insight in terms of getting into the IT market….

And when the Girl and I drove home, she perched her feet on the dashboard, sunned herself, and sang songs about standing “On Top of the World.”

And we weren’t afraid. 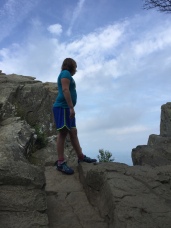 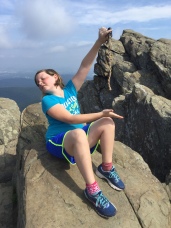 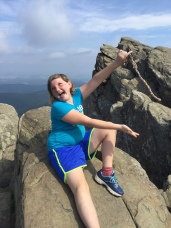 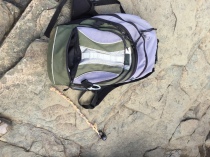 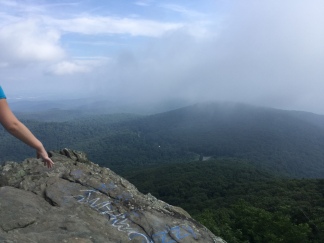 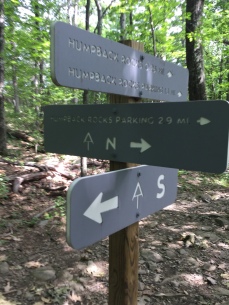 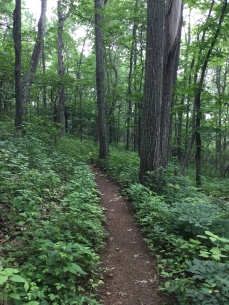 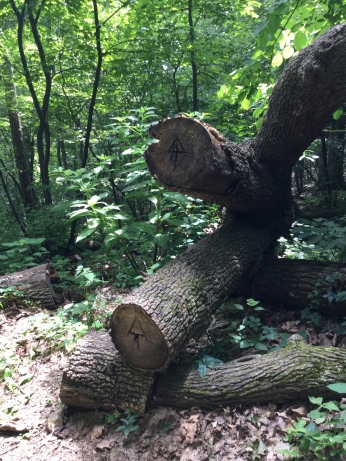