I used to hate cats.  And by hate I mean loathe because I was terrified because, when I was a little girl, I was bitten by a cat.  Therefore, for about two decades, I HATED cats.

Then, when I was hanging out with my best friend, Lori, who is a cat aficionado, I realized that not all cats are satanic beasts waiting to destroy me.  I even gave serious consideration into adopting one of her cats, Scott.  I loved Scott.  He was a sweet cat who enjoyed having his tummy rubbed. Scott was part of a litter whose mother was feral but tolerated Lori because Lori brought food.  One day, Lori and I were standing on her front porch, the feral cat and her brood were at our feet.  We were dangling a ribbon for the kittens to play with, and one was right by my feet.  Lori observing me staring at the kitten, wondering if I could pick it up (Lori wanted to try and domesticate the kittens).

“Yup,” I replied, bent over, and picked up the kitten by the scruff of its neck.

Poor thing.  It just hung in my fingers, shocked that its feet were no longer on solid ground. I immediately took the kitten in doors and put it in a cage Lori had set aside in case she ever caught one of the kittens.

A moment later, when I returned to the porch, Lori was doing the ribbon trick and mimicked my actions.  This time, the kitten went spastic, hissing and screeching.  She managed to get it inside and join the one I picked up.

The kitten I had grabbed was my future Scott.  His littermate was a whack-job female; yup, I named her Zelda.  Scott was named for F. Scott Fitzgerald…guess who Zelda was….

At night, I would hold Scott in a thick leather glove in case he went all feral on me.  I would rub his back and then roll him onto his back and rub his belly.  Eventually, that feral kitten succumbed to love and compassion and his tiny chest just thrummed with the intensity of his purring.

Zelda just tried to bite Lori in the thumb.  Silly kitten, living up to her namesake.

Scott was always a sweet cat. He loved being cuddled and rubbed…on his belly.  I really wanted to adopt him, but Pat did not like cats at all.  Sadly, a year later, Scott died.

Fifteen years later, I was at church and noticed this sweet, little tabby cat with a crooked tail.  This cat would chirp to me and would come up to be petted and loved.  By the way, this cat looked just like Scott….so it was love at first sight.  Eventually, I “named” the cat “John” because it was friendly and lived at church and I was not about to lift its tail to find out if it was a boy or a girl.  By the way, I chose John because John was Jesus’s favorite apostle and I figured that Jesus had to really like someone who was nice and friendly (and maybe even chirped….that would be cool…a chirping apostle).  Also, another cat was at the church but this was seemed to doubt if we were friendly or not.  Guess what its name was…Yeah….Thomas. 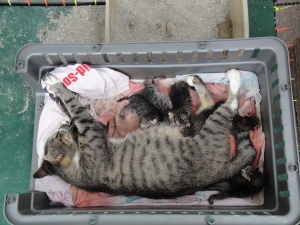 Doesn’t matter.  Eventually, I adopted John and brought her home and she eventually gave birth to two lovely litters of kittens who were sweet and precious and wonderful.

Within a week of adopting John-the-female-cat, another cat decided that my home would be a perfect living spot.  Now, John was cute and pretty and looked like Scott the cat I wanted to adopt but never did.  This other cat was orange and gray and brown and splotchy.  John had pretty stripes and spots and everything was cute and she had a pink nose.  This other cat was…not like John with her symmetry.

And I didn’t want this other cat because Pat was not quite happy that I had adopted John in the first place and now this other cat was hanging out around the house because we had food out and…yeah.

Since that time, John has sadly died (long story, don’t ask).  However, Ugly-Cat has thrived.  It turns out that John was not quite as sweet and friendly and cuddly as Scott.  She might have looked like him.  She was NOT like him at all.  In fact, she was more than happy to ignore me and not get on my lap and be loved on.  She wanted to eat and be left alone.

But Ugly..now she (I think…her butt’s fuzzy and I don’t lift cat’s tails or part the hair to find out what lies beneath…remember, I’m actually still a bit afraid of cats) is something quite different.  If I sit in any place for more than ten seconds, she will take up residence in my lap, start kneading and purring, and eventually either fall asleep or push either her head into my hand or her butt into my face.  By the way, I think Ugly is a she because she doesn’t have two circles just beneath her butt.  And she must have been spayed because she has never brought home kittens.

In the last two years, Pat’s emotions towards Ugly has softened, somewhat.  He kindly refers to her as “Gato” and generally ignores.  However, last year, when the winter got truly bitter and we were experiencing sub-zero degree days, my husband’s Grinch heart got a little bigger and he suggested that we bring the “Gato” into the house at night.  Soon enough, she was coming in during the day too.

Ugly-Cat generally rules the upstairs.  She used to sleep in the Boy’s room; he has a bunkbed but his mattress is on the lower bunk so he can sleep with the dog.  I took some wood and laid it across the braces for the top bunk; then, I piled on some blankets and Ugly got a nest.

This last winter, one night, Pat let the cat out to make sure she didn’t make a mess in the house.  However, around eleven at night, he noticed that she had not come home.  Even though I was in bed and getting ready to sleep, he came in, making noise about how “Gato” wasn’t home.

“Are you worried about her?” I asked him.

Then he went downstairs, opened the front door, and called out, “Gato!” 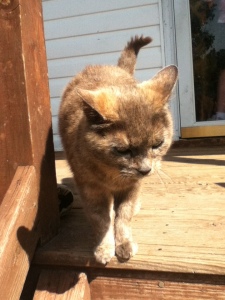 He made the tongue clicking sounds I make to call her.

He filled up her food bowl and shook it lightly so that she would hear the food.

He came back up and I could tell that he was genuinely distressed.  Finally, I offered to take my car and drive around the block because she usually comes to the house if she hears my car.

“Well, only if you’re worried about her,” he said.

I drove around the block, came home.

The next morning, the “Gato” was on the front porch, meowing for us.  I brought her in and she immediately went up to my room, curled up on the bed next to Pat, and got all comfy with him.  He reached out and “absently” petted her behind the ears.

“Gato,” he said, his voice a little low..almost like a human-growl.

So, yeah.  I’m not a cat person.  Nor is my husband.  The Boy is.  But don’t look over my shoulder at the muffin-animal sitting on my desk.  That’s not Ugly-Cat.  It’s an illusion.