Today, at the war memorial in the city, the local Vietnamese community held a 40 year anniversary…commemoration of the fall of Saigon.  When this happened, I was three years and one month old.  My father had already served a year in Thailand and, obviously, my memories of these moments are completely non-existent.

Through teaching, I have made friends with the local chapter of the Vietnam Veterans of American and was invited by one of the members to attend today’s ceremony.  Naturally, I accepted; however, I was completely unprepared for the experience, the solemnity, the pervading grief that was so apparent on the men and women who were there to mark the fall of the Vietnam War.

When I arrived, I was immediately greeted by Bruce and Dave, two men who frequently come to speak in my classroom and are vehicles for the improvement in my father’s and my relationship.  These men, in addition to Mitch, George, and Lenny, have had transformative effects upon my life as they taught me about the harshness of war and the horrific and deplorable treatment of the Vietnam Veterans upon their return to America.

At the Seabee’s memorial in Washington DC. If memory serves me well, Dave is in the baseball cap towards the left.

Dave has pretty much adopted me into his family, referring to me as “Other Daughter” as he is now my “Big Daddy.”  He is a gateway to history for me, a way for me to understand my father’s experiences, even if my dad wasn’t on the front lines or on the rivers or in the jungles of Vietnam.  Regardless, my father was on a MARS radio station and, from what I have gleaned from his letters, still dealt with the horrors of war, even if in a watered-down version in comparison to others.

So when I arrived, I was immediately ushered towards the front and sat with Dave, members of his family, Mitch, and Bruce.  Shortly after my arrival, the ceremony started and I was immediately aware that this really wasn’t a celebration (please, don’t throw a shoe at my head) but almost like a funeral service, or a wake. After the flags of the United States of America and South Vietnam were brought into the hall, the national anthems of each country were played.  As the strains of the “Star Spangled Banner” echoed through the hall, the hush of respectful silence was steadily replaced by the soft voices of men and women singing, including Bruce.  I have to confess that I am not the most patriotic of people; however, when I watched Bruce singing, his hand over his heart (or by his head in a salute….I can’t really remember), the strength of his pride and dignity was impressed upon me.

I was not prepared for the richness of the Vietnamese anthem; immediately after the opening chords quieted, the entire congregation of Vietnamese men and women sang loudly.  Their pride, their love for their nation was powerfully visible, especially when one man constantly wiped tears from his eyes.  This, this was when I realized I wasn’t observing a mere recognition of the end of a war.

I was witnessing people mourning the loss of their homeland.

I know what it is to be homesick.  I have no idea what it is to be dis-possessed and to stand on the edge of one nation and never see or hear the sounds associated with home.  I love Germany.  I love it passionately.  I would give anything to move back there, but, in the same breath of typing those letters, I know that I wouldn’t.  Because my beloved husband couldn’t bring his car collection or his gun collection to Germany.  And the many hours of happy tinkering that he does would be curtailed in Germany, either due to noise ordinances or cleanliness/appearance ordinances or other laws.  Although Pat was a German major in college, he would chafe at the laws in Germany. 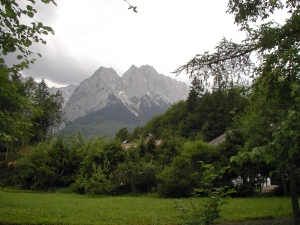 But I have ways to cling to my world, to my beloved homeland (note, I am not a German citizen, but I really do feel like Germany is home).  I have restaurants that will serve an approximation of German food.  I can listen to German radio, read German news on the internet.  I can follow my father’s favorite German soccer team.  One of my favorite sounds is the sound of the wind combing through pine trees….which I can hear if I sit on my front porch and just listen.  Across the cul-de-sac, my neighbors have three or four mature pine trees in their yard, and, every now and then, the wind will cut through them just right and I am home, even if only in my mind, walking along the paths in the mountains.

But the Vietnamese people at the war memorial, as much as they can duplicate the food or maybe find the sounds or touches that will dull their sense of homelessness, they can’t return home with the ease that I can board a plane, go through customs, and walk out into the German countryside.  And, as I briefly observed the man in the yellow jacket running his fingers under his eyes, rubbing the tears into his skin as he continued to sing his beloved county’s anthem, I felt so shallow, so superficial in comparison to his grief.

The speeches began, and one Vietnamese woman talked about how she was a part of the diaspora.  Upon hearing this word, I was again immediately aware of the fact that I am not as nomadic as I generally think I am.  I might not have a good answer to “Where are you from?” given that I have moved so much and don’t consider the city where I live to be “where I am from.”  But I have places which hold the fossilized remains of my roots that I have sent into the soil and which wait for me to come back and regain my sense of home.

Vietnam still exists.  But these people can never go home because the government that they used to love is no longer in existence.  As they talked about “re-education camps” and the loss of their loved ones, I constantly saw, in my mind, the helicopters on the roof of the buildings, preparing to leave.  And the people, the innocent sufferers of war, climbing the stairs only to be turned away, pushed down, exiled into oppression.

I do not know what it is to lose my home and never regain it.  In my parents’ apartments in both Florida and Germany, the extra room is called “Heather’s room.”  If anything, I have told my husband, my beloved rotten snake corpse, that what I consider to be home is within the circumference of his arms.

But today, as I listened to the awkward lisping of the Vietnamese people trying to speak English to the gorgeous shift of when they spoke Vietnamese, I heard the soft lilting of vowels and consonants that had no real meaning to me but told me stories of love, of dispossession, of loss, of homesickness beyond understanding.  The Vietnamese language is soft and made me think of lotus blossoms.

I still don’t have an answer to “where are you from?”  I was born in England.  I lived in Arizona, Washington DC area, Munich, and Grainau, Germany.  I went to college into the middle of Virginia where I met my beloved husband.  I now live in the suburbs of a city and own twenty acres of land in West Virginia.  I don’t know where I’m from.  But I know that the homes I have and love are still there, waiting for me to come home.

The top of my mountain